My friends and family aren?t usually surprised when they hear that I?ve entered yet another obstacle race. Although sometimes an eyebrow is raised if its a long one like the Mud Masters Marathon in Holland. News of my entry into World?s Toughest Mudder however was met with genuine incredulity, a twenty four hour event in the cold of mid November in New Jersey. Before entering WTM I had to weigh up the time and financial cost required to get most out of the experience. After I ran my first sub two hour Tough Mudder at Matterley Bowl curiosity got the better of me and I had to find out what happened to the cat.

The cross Channel I did earlier this year is the first event I?ve ever trained for and I knew I would have to be equally organised if I wanted to do well at WTM. Milton Keynes Rowing Club has equipped me with the discipline to train no matter what the weather, and I am enormously grateful for their help in setting me on the road I?ve found myself on. However I had to change tack for a twenty four hour running event and joined Leighton Buzzard Triathlon club to add some structure to my running. My training time was now split between rowing, triathlon, and climbing which although it sounds like it might be hard to focus, it actually just meant that it was never a chore to train as I was doing so many different things. Other than Thursday nights at the triathlon club, most of my running was done at races and circumstances meant I didn?t run for six weeks prior to WTM.

The main block of my training started at the end of August and comprised or 12 laps of Tough Mudder, 6 laps of Nuts Challenge, a Goruck Challenge, and Mud Masters Marathon, all within 7 weeks.

Twenty four hours is a long time so I signed up to as many long events as I had time for. One weekend Team Mudstacle ran the 12 hour Brutal Enduro then drove to Redhill in the morning for Back to the Trenches. A month later I experienced On Trail: Training in the shadow of Kinder Scout in the Peak District, a 12.5 hour event in torrential rain. When we told the organisers we were planning to run Tough Guy Nettle Warrior the next day they laughed at us. We made it but it broke me for a week. I recommend that anyone considering WTM first do On Trail by Primal Events [reviewed by Thomas yesterday here], if you can survive that you will be in good stead. The main block of my training started at the end of August and comprised or 12 laps of Tough Mudder, 6 laps of Nuts Challenge, a Goruck Challenge, and Mud Masters Marathon, all within 7 weeks. My recovery time got shorter after each weekend until the last weekend of 4 laps of Tough Mudder North West I actually felt fine on the Monday. 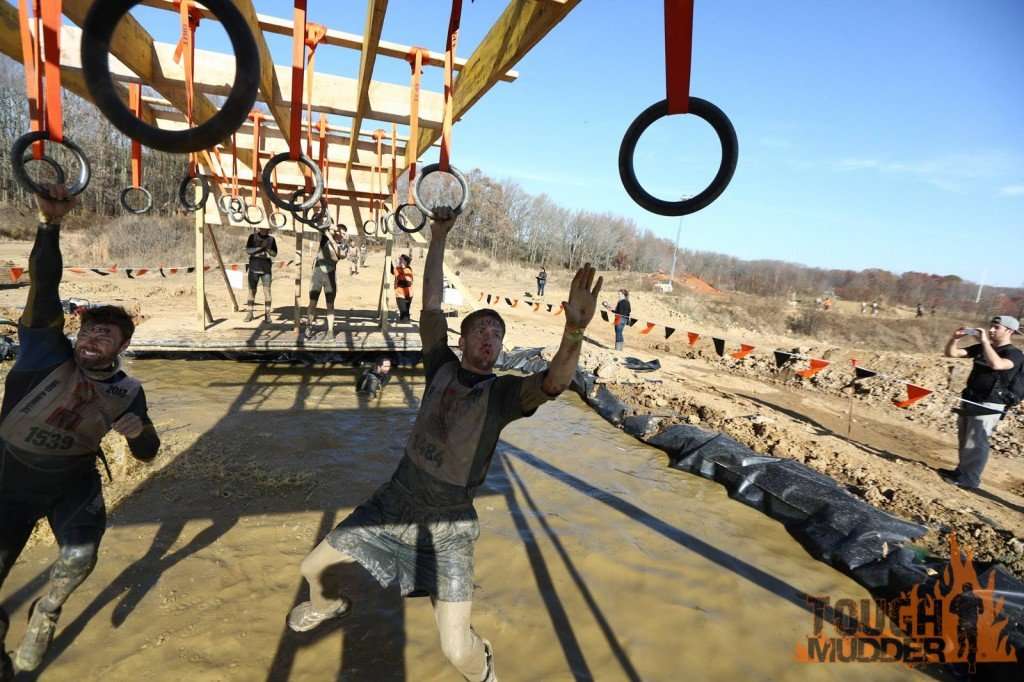 It was October by this time and I decided to take a week off anyway to give my body a rest. A week later I got on the rowing machine and so my feet could have a longer break. If you have access to a rowing machine, they are a great tool for training for obstacle races, and if you can rack up 100km in a week it will go some way to preparing you for the mental aspect of being on course for 24+ hours.

In previous years equipment has played a massive part in WTM, with frequent full immersions in cold water you needed a thick wetsuit to keep you warm. This year the course was supposedly designed such that you could stay relatively dry if you completed every obstacle successfully. Whilst there was no Arctic Enema, Walk The Plank, or Under Water Tunnels it was disingenuous to suggest that competitors could stay mostly dry, it was more a case of staying slightly less wet, which I assure you is an important distinction. The factor that made the biggest difference this year was that it was unseasonably warm so the attrition rate from people falling to the cold was much lower. I took a 3/2 wetsuit and 5/4 wetsuit and despite some of the water being really cold the 3/2 was enough. You need to plan for all weather and the cost of equipment soon adds up, that is in addition to cost of entry, travel, and accommodation. Fortunately there is an active WTM community and there is plenty of advice on the forum about what has worked for people in the past. 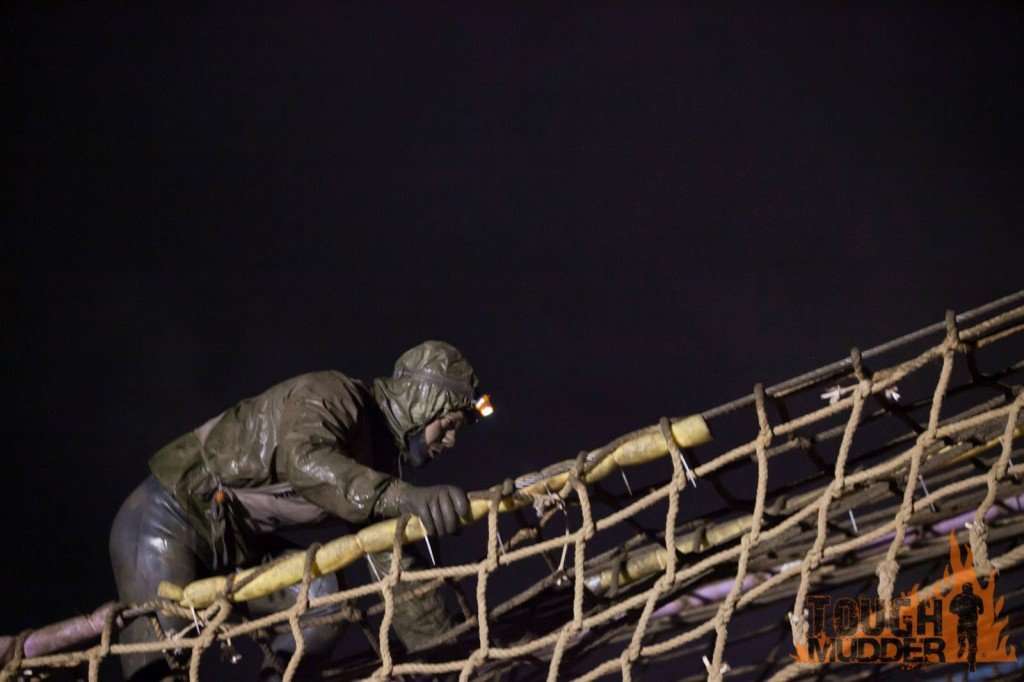 With a good amount of training under my belt and a sufficiency of equipment purchased it was eventually time to head to New Jersey. The anticipation on the forum was palpable for weeks before the event as people made final purchases and wound down their training. Registration however was calm as people picked up their race bibs and set up their tents at Raceway Park, Englishtown on Friday afternoon. On Saturday morning tent city was buzzing as people prepared for the race, choosing what to wear and covering anything that might rub in a variety of lubricants and unguents. Underestimate this at your peril, once you?ve rubbed something raw its hard to recover, if in doubt cover it in Vaseline and reapply every few hours. The warm weather meant that most people started in normal running gear and those who started in wetsuits were soon trying to peel them off and looking forward to a cold water penalty. The down side of not starting in a full wetsuit was that grit and mud got everywhere, so when night fell and it was time to suit up you had to take care to clean off as much as possible or suffer the consequences.

Unusually the course was 5 miles not the signature Tough Mudder 10-12 miles, however there were still 22 obstacles so you were never running for too long before you had to conquer one. This worked well for me as I?m much better at obstacles than running and for the first few laps that kept it lively, however as time passed my interest waned and the first real obstacle reared its ugly head, boredom. There were only a few hours of light on Saturday and after a few laps I found myself alone trudging along in the dark, eating another energy gel wondering what I had spent all this time and money on. There were plenty of people on course but most conversations were brief as people moved at their own pace, possibly wondering the same things I was. You have to be in it for the long haul at WTM and there came a point in the race when that meant taking solace in company at the possible expense of pace, as its harder to move as a group. Sometime in the night I teamed up with Mark, and Danny and my mood was transformed. As true Tough Mudders we took on the night and obstacles together. 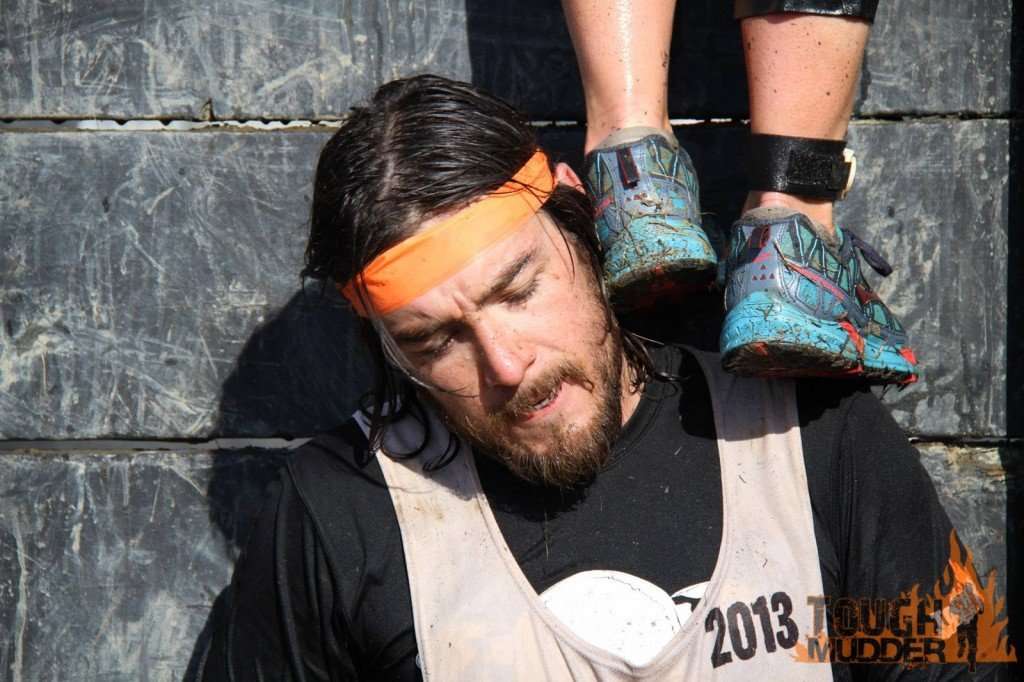 Sometime after 4am I had to take a break to deal with a pain in the back of my knee, having started with a knee injury I was worried that it was turning south. It was getting harder to walk and I didn?t want to do any long term damage. As Mark and Danny headed off into the night I went back to my tent to clean up and get warm, then spent two hours massaging my legs. When they got back from their lap Mark told me to get up, as I was going out for another two laps. In a few minutes I was in a wetsuit and up and out of my tent ready to go, the pain in my knee significantly reduced and I was ready to face it all again. Danny had met his 50 mile target and stopped and Andrew joined us. Brendan who had also travelled with us from Blighty had left us eating his dust early on and was heading for 75 miles by this point.

Leap of Faith broke fingers, ribs, and goodness knows what else, yet it was the highlight of the course for me, providing a mental and physical challenge.

Many of you will have done a Tough Mudder and I don?t feel it necessary to talk about the obstacles too much with two exceptions. A new obstacle called Leap of Faith which is like Walk the Plank except you have to run and jump onto a cargo net suspended over a pit of water. Take a look at the pictures to understand what I mean, then imagine that its 4am and you?ve been going for 16 hours and covered 45 miles as you wearily climb up. Leap of Faith broke fingers, ribs, and goodness knows what else, yet it was the highlight of the course for me, providing a mental and physical challenge. If you failed, in addition to falling in the water, you had to run a penalty loop. Furthermore if you were competing in a team and one member failed an obstacle the whole team had to do the penalty.

Despite the the unseasonably warm weather it would be remiss of me not to mention the penalty for failing Everest, crossing a freezing lake. Everest was about mile 4 on the 5 mile course and is one of the hardest obstacles to do on your own. If someone was on Everest when you got there they would almost certainly lend a hand. There are even photos of the the race leaders Ryan, Junyong, and Olof helping fellow Mudders up, and somehow these guys still managed to cover 95-100 miles. In addition to the company part of the cement of our pseudo team was knowing that we didn?t have to face Everest alone. Mark did the lake penalty on one of his solo laps and despite being as tough as nails expressed that he had no intention of getting back in the lake. I can only imagine how hard previous WTM were with forced and frequent immersions and colder weather.